I, Lyn Pigney, want the UK to Remain in the EU because….. 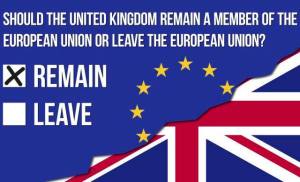 Nothing about the ideals, principles and philosophy of the EU is wrong, misinformed, bigoted, cruel or violent. Nothing is based on hatred or fear, unless you count a determination not to plunge Europe into chaos ever again as fear. Some of the implementation isn’t the greatest, but that’s a question of evolution, a process which is already taking place in the EU, a process to which the UK has already contributed a great deal. During its membership of the EU, the UK has evolved from an economy in dire straits into one of its economic leaders, ain’t that great? Yes, of course, but there’s more to it than that. Our country has embraced freedom, progress, tolerance and united effort, to an extent that our parents and grandparents, who fought for those values, would be proud of. If we now reject that concept, what does it say about us and our values? I’d prefer the UK not to be a “green and unpleasant land”.

This entry was posted in Why and tagged Why. Bookmark the permalink.
Loading Comments...