Radicalisation is an evil, pernicious disease that is once again attacking our country.

Radicalising people or even a country is not a 21st century phenomenon, nor is it restricted to the young or vulnerable.

It happened in Germany, Russia, China, among other countries on a massive scale in the last century.

It is not even the first time that the population of the UK has been subject to radicalising propaganda on such a massive scale.

Just over a century ago, it was used to demonise the Central Powers. This not only led to hundreds of thousands of young men from the UK volunteering to fight and die in the “War to End All Wars”, it also resulted in citizens of the UK being vilified and attacked.

Just prior to World War 2, an extreme right wing movement tried to radicalise the UK.

We resisted it then. We must continue to resist it now.

Horrifyingly, that radicalisation is happening again in several European countries, with some of the worst here in the UK.

You only have to look at the appalling poster that UKIP, and others before them, put out. 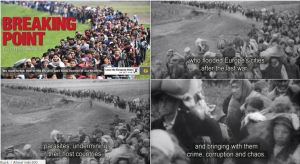 Listen to the number of people who wonder what the fuss is about.

The effect of the almost subliminal messages is reinforced when seemingly mainstream political figures start using the same storylines.

It is time for us to step up to the challenge and put a stop to this process.

History not only tells where radicalisation leads, it also tells us the human cost of stopping it once it has started.