How a Churchill quote was “stitched up” to support Brexit 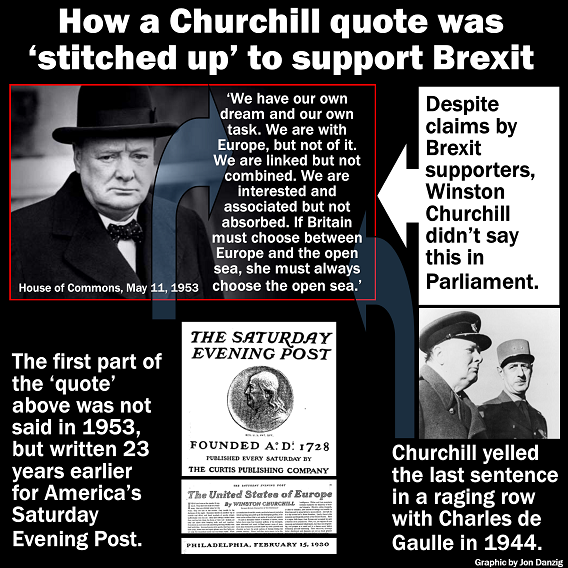 Dead people can’t sue or answer back. Maybe that’s why supporters of Brexit thought they could get away with fabricating a quote by Winston Churchill to support Britain leaving the European Union.

Increasingly doing the rounds in the lead-up to Britain’s EU referendum is a quote by Churchill which it is claimed he said to Parliament on 11 May 1953 when he was Britain’s Prime Minster.

The quote or variants of it, usually depicted alongside a photo of Churchill, is being heavily promoted on social media such as Twitter and Facebook, and quoted in readers commentsin multiple newspapers and blogs, usually by UKIP supporters.

The quote is being used to prove that Churchill would never have supported Britain’s membership of the EU, and that if he were alive now, he would be against the concept of today’s European Union and vote for Brexit in June’s referendum.

This is what’s claimed Churchill said in Parliament in 1953, during his second term in office as Prime Minister:

“We have our own dream and our own task. We are with Europe, but not of it. We are linked but not combined. We are interested and associated but not absorbed. If Britain must choose between Europe and the open sea, she must always choose the open sea.”

The problem with this quote is that it’s a deception. Brexit supporters have fabricated it by ‘stitching’ together two different quotes by Churchill, said by him at different times and in different contexts.

The authors of this ‘stitch up’ have then falsely claimed that Churchill made this announcement in Parliament in 1953 as a reason for Britain not to join the emerging European Community.

In this way, Brexit supporters have posthumously ‘recruited’ Churchill as a backer of Britain leaving the EU in the forthcoming referendum.

So, let’s unravel this crude duplicity and betrayal of Britain’s greatest war leader.

The first four sentences of the ‘quote’ were not said by Churchill in Parliament in 1953, but written by him 23 years earlier, in February 1930, for America’s Saturday Evening Post.

Ironically, the title of Churchill’s article in 1930 was ‘The United States of Europe’ – a concept which he passionately supported.

Churchill considered that a truly united Europe would be the antidote to war and the path to greater security and prosperity for the continent. This in turn would be of considerable value to Britain, wrote Churchill. His article was remarkably prescient, as it outlined a blueprint for today’s European Union.

Churchill concluded that, “the concept of a United States of Europe is right.” His article imagined a Europe without internal barriers or tariffs, or passports, or multiple currencies, which would enable the “free interchange of goods and services” and the free travel of people across the continent.

And the idea of “European unity” was not new. “Europe has known the days when Rumanians lived on the Tyne and Spaniards on the Danube as equal citizens of a single state,” wrote Churchill, reminding his American readers of the Roman Empire.

“Everywhere, in every age, in every area however wide, our every grouping of peoples however diverse, unity has made for strength and prosperity for all within its circle. Why should Europe fear unity?”

It was clear from his article, however, that at that time Churchill did not envisage Britain – which then headed a huge Empire and Commonwealth straddling the world – needing or wanting to be part of a ‘United States of Europe’.

It’s from this article that Brexit supporters have taken four sentences and claimed that instead of 1930, Churchill spoke them to Parliament in 1953. He did not.

Let me put the quote into context by quoting the sentences that immediately preceded it:

“We are bound to further every honest and practical step to which the nations of Europe may make to reduce barriers which divide them and to nourish their common interests and their common welfare.

“We rejoice at every diminution of the internal tariffs and the martial armaments of Europe. We see nothing but good and hope in a richer, freer, more contented European commonality.

“But we have our own dream and our own task. We are with Europe, but not of it. We are linked, but not comprised. We are interested and associated, but not absorbed.”

Churchill’s view in 1930 would be bound to change by the 1950s, by which time Europe had endured a second devastating world war and was desperate to avoid another. (More of that shortly).

So, what about the last sentence of the misleading quote that Brexit supporters insist Churchill said to Parliament in 1953? Here it is again:

“If Britain must choose between Europe and the open sea, she must always choose the open sea.”

This was not said by Churchill after the war, but during the war, on the eve of the ‘D Day’ landings in Normandy that would eventually lead to victory over Nazi Germany. (Source: D-Day, the Battle for Normandy by Antony Beevor)

The French leader, Charles de Gaulle, was flown from Algiers to London to be briefed on the battle plans called ‘Operation Overlord’.

But Churchill became exasperated with de Gaulle’s apparent obstinacy and brinkmanship, and wanted to demonstrate his strong loyalty to US President, Franklin Roosevelt, without whose help Britain – and Europe – would be lost.

Churchill’s temper with de Gaulle flared up and he demanded to know how the British could act separately from the United States. During the raging row, Churchill bellowed to de Gaulle:

“We are going to liberate Europe, but it is because the Americans are with us. So get this quite clear. Every time we have to decide between Europe and the open sea, it is always the open sea we shall choose. Every time I have to choose between you and Roosevelt, I will always choose Roosevelt.”

De Gaulle accepted this was bound to be the case, and tempers calmed down during the ensuing lunch (with fine wine). Churchill raised his glass and said, “To de Gaulle, who never accepted defeat.” And de Gaulle raised his and said, “To Britain, to victory, to Europe.”

For sure, the two of them had a mercurial relationship. De Gaulle once famously and loftilyremarked:

“When I am right, I get angry. Churchill gets angry when he is wrong. So we were often very angry with each other.”

Brexit supporters should not have taken a quote by Churchill yelled in anger during the war and falsely claimed that he said it as part of a considered speech to Parliament eight years after the war had ended.

In fact, the entire quote now being promoted by Brexit supporters to claim Churchill’s support for their cause is nothing other than a misleading concoction.

It is, however, true that in the early 1950s Churchill did not support Britain’s membership of the emerging European Community.

So why haven’t Brexit supporters instead quoted what Churchill actually did say to Parliament on 11 May 1953? After all, it’s easy to verify as it’s available online in the edition of Hansard for that day:

“Where do we stand? We are not members of the European Defence Community, nor do we intend to be merged in a Federal European system. We feel we have a special relation to both. This can be expressed by prepositions, by the preposition ‘with’ but not ‘of’  – we are with them, but not of them. We have our own Commonwealth and Empire.”

In 1950, Churchill explained to Parliament why he didn’t “at present” foresee Britain being, “a member of a Federal Union of Europe.” This was primarily because of Britain’s position, “at the centre of the British Empire and Commonwealth”, and, “our fraternal association with the United States of America.”

It was clear that Churchill’s opposition was not a principled one, but a practical one.

All that was to change during the course of the 1950s and 1960s, when it became clear that Britain’s Empire had finished and its Commonwealth was diminished.

In March 1957 the six nations of France, Italy, West Germany, Belgium, the Netherlands and Luxembourg founded the European Economic Community (later to be renamed the European Union).

Four months later Churchill gave his last speech on Europe at Central Hall, Westminster. He welcomed the formation of a ‘common market’ by the six, provided that, “the whole of free Europe will have access.” He added, “we genuinely wish to join.”
(Source: Winston S. Churchill: His Complete Speeches Vol. 8 page 8681)

Churchill supported the ‘welding’ of West Germany, France, Italy, Belgium, Holland and Luxembourg into ‘an organic whole’, which he described as a ‘happy outcome’ of the European Economic Community. Churchill added:

“We might well play a great part in these developments to the profit of not only ourselves, but of our European friends also.”

And in 1963, just two years before he died, Churchill wrote:

“The future of Europe if Britain were to be excluded is black indeed.”

Brexit campaigners, however, are increasingly using Churchill’s words and images to recruit his memory to their side. Recently, for example, ‘Vote.Leave’ launched a videopresenting the case for Britain’s exit from the EU, and featured Winston Churchill alongside other famous British heroes.

But Churchill’s grandson, Sir Nicholas Soames, launched a scathing attack against this use of the war leader’s words and images in support of Brexit. He said that they had no right to use his grandfather in this way and suggested that Churchill’s views would never have aligned with their campaign.

“Winston Churchill was a profound believer in the values of European co-operation and the need for it, and I am very disappointed to see these people twisting his views to suit their own ends.”

Contrary to what Brexit supporters might tell you, Churchill is recognised as one of thefounders of the European Union, and has a building named after him at the European Parliament in Strasbourg. (I know; I’ve been there.)